Large-scale and high resolution geographical/topographical data has the potential to improve resilience in natural and flood hazards.

GECOsistema is developing Artificial Intelligence based algorithms and technology to realize this potential. 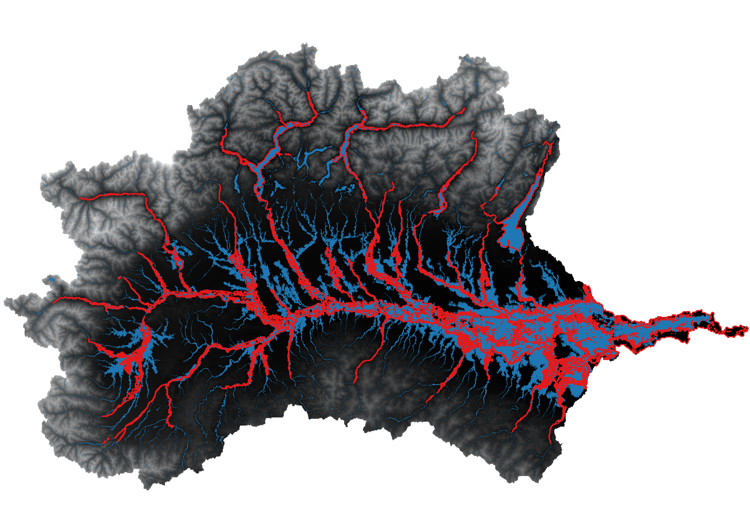 SmartFLOOD is an innovative Artificial Intelligence Cloud-Web platform developed to drastically reduce cost and processing time in mapping Fluvial Flood Hazard at large-scales and at high resolution anywhere in the world.

SmartFLOOD generates in in real-time comprehensive flood hazard map for every place in Europe (at 25 m resolution) and soon for the entire planet (at 90 m resolution).

Calibrating the GFI threshold  for a specific area of interest over an available flood hazard reference map, provided by existing flood hazard maps or numerical hydrodynamic simulations uploaded by the user in the platform;

SmarFLOOD firstly enables the capability to extend informations of existing flood areas to uncovered regions (for example from a sub-basin to the entire hydrological basin) secondly to downscale at higher resolution, up to 25 m,  the available flood hazard reference maps.

The Web Service is designed to provides end-users with the possibility to consistently and cost-effectively extend local detailed flood studies (i.e. those coming from complex flood models, field studies or remote sensing detection) in uncovered data-scarce regions, to extrapolate them to larger scales and downscale to finer resolutions.

The service is fully operative and actually covers the entire PAN-EU and  will be extended soon to be operative worldwide.

The Demo Version is available for free with some limitation in terms of area and resolution at the following web address https://gecosistema.com/smartflood . 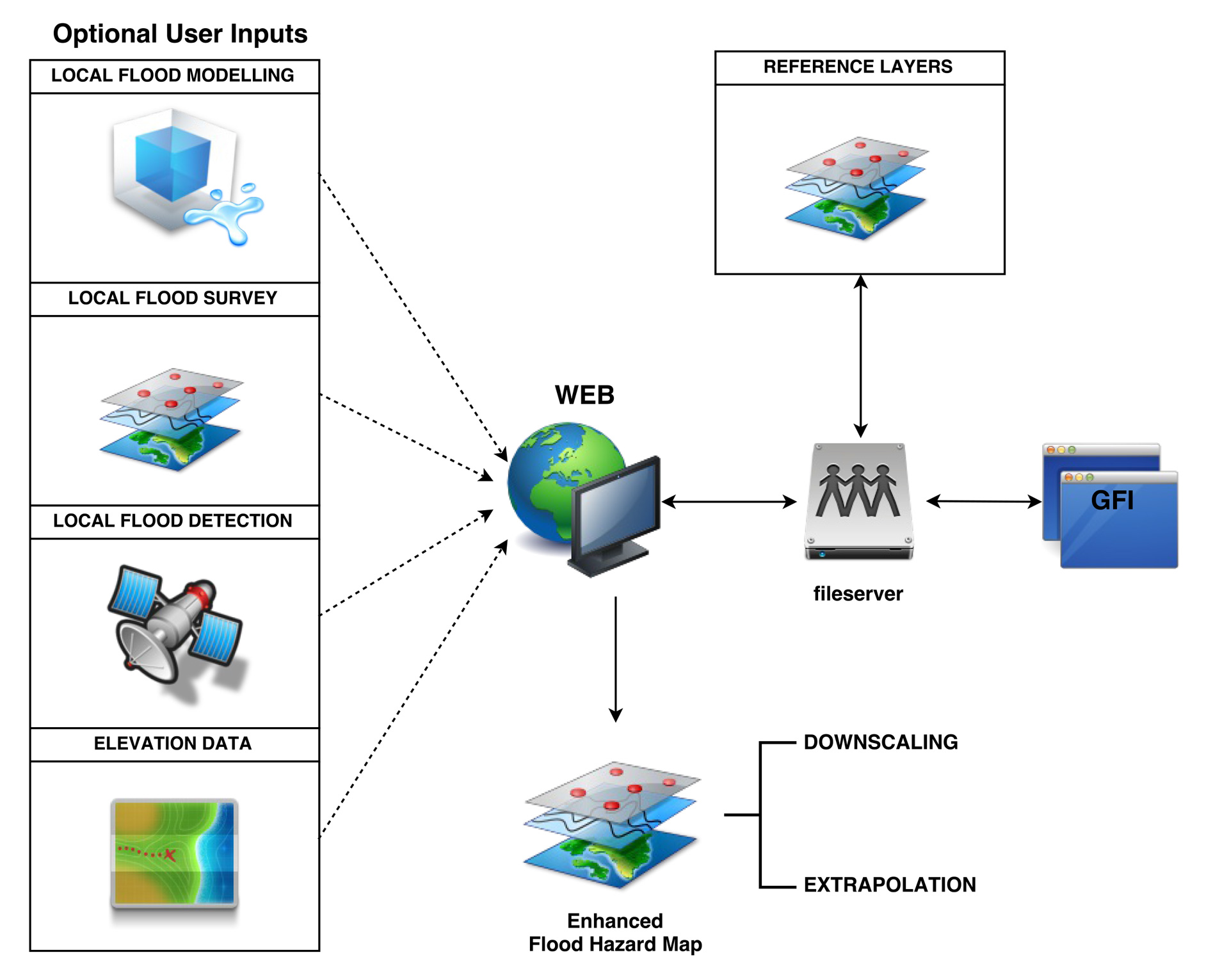 SMARTFLOOD attends to the needs of single users seeking for local high detailed maps in data scarce regions where numerical modeling may not be feasible. 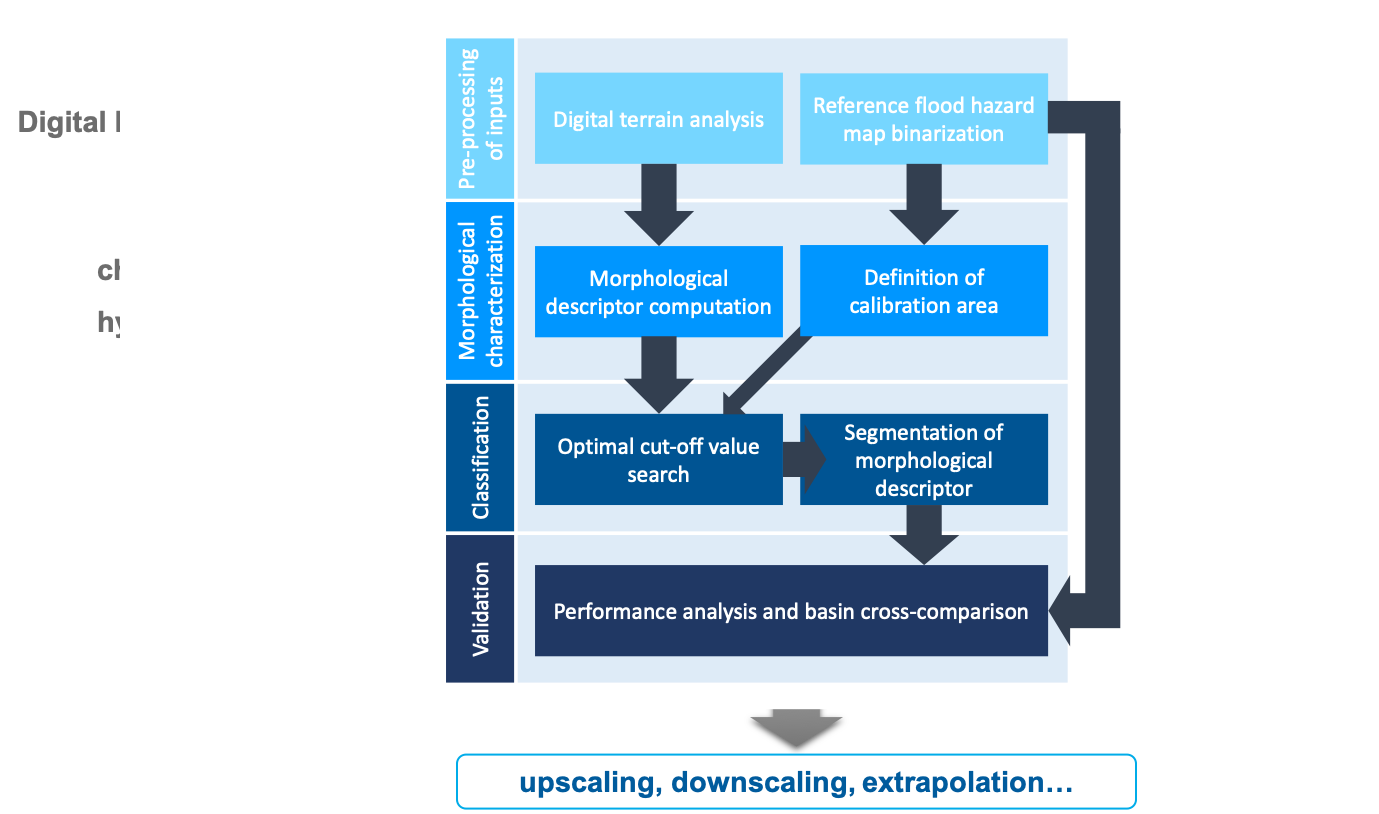 SMARTFLOOD core algorithm is based on the morphological descriptor Geomorphic Flood Index (Samela et al., 2017), GFI, and its use as a AI-based  linear binary classification feature (Degiorgis et al., 2012).

The AI-based supervised classification of the GFI is then performed within the classification area established for each river basin, searching for the optimal threshold that better represents the binarized reference flood extents.

The optimal threshold is subsequently used to segment the GFI layer, resulting in an index-based flood extent map (i.e., all values above or equal to the threshold are flagged as flooded and below as not flooded), or map of flood-prone areas.

Finally, we quantify how well suited the continuous classifier is and how well the classification performed within each, and across, river basins.

Which are the advantages of SMARTFLOOD outputs? 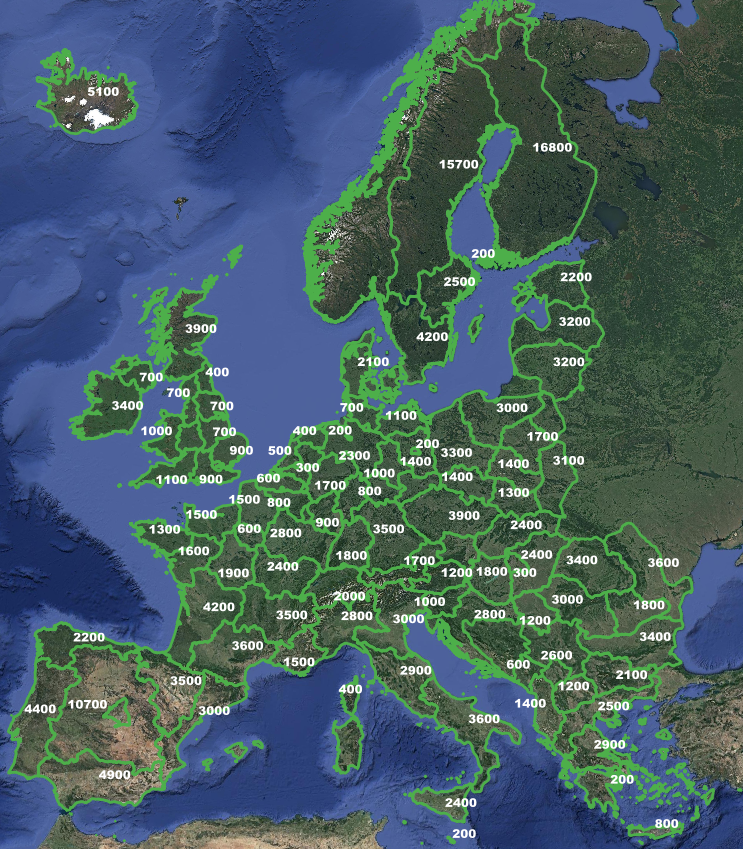 SmartFLOOD is available free-of-charge with limitations for some areas prior user registration.

The Annual Subscription give access to SmartFLOOD platform without any limitation for the acquired SmartFLOOD Zones for 1 year.

The User can use the AI-cloud-based platform for infinite running and calibration with the possibility to upload personalised Flood Hazard Reference Maps and Download the Flood Hazard Output Maps.

Please find here on the left pane a map of Annual Subscription Costs (EURO – VAT Excluded) for each SmartFLOOD Zones.

Find out the SmartFLOOD demo now!